The story of Euromaidan 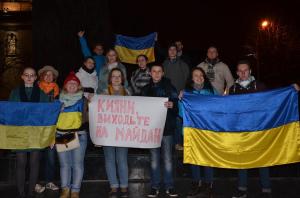 Euromaidan started on November, 21 as an initiative from students, 14 Ukrainian Catholic University fellows among them, who came out to the central square in Lviv to claim against Viktor Yanukovych’s refusal to sign The Agreement  with the European Union. This endeavor brought together more supporters. This also inspired the capital Kyiv. The central place Maidan soon filled with those willing to show their disagreement with the president. Kyiv Euromaidan was launched by Mustafa Nayem, a Ukrainian journalist of hromadske.tv who is proactive in featuring the events.  From this moment on, the students from all over Ukraine headed for Kyiv. This way the two Euromaidans, in Lviv and in Kyiv, broke out on that Thursday night. Since then, they have been active shoulder to shoulder. From the very start, the students admitted neither party flags, nor symbols in the crowd or politicians on stage. It had to be a peaceful demonstration of students willing to live in a better Ukraine. They aspired for the EU as they viewed it as an ultimate way to raise living standards, to combat corruption, and make other crucial changes to the system.

Peaceful protests lasted for a week. Then in the early hours of November, 30, government forces attacked a small group of sleepy students at Euromaidan. They would never believe the authorities could use the Berkut special riot police units against the young people. They claimed later they had felt the tension and anxiety during the whole day before. Berkut fighters kicked the protesters and violently beat them with batons. Up to 40 protesters were hospitalized, many of them were arrested. Some young people are still missing.

Ukraine has never seen such cruelty before. Masses of people from all over Ukraine were coming to Kyiv. They organized buses to go to the venue, many came by car readily picking up those who willing to join. A lot of

vehicles were blocked by the police on their way. However, people kept coming. The 1st of December witnessed over 1 million people at Euromaidan. Ukrainians came out to stop the violence of authorities. They were angry with the president in charge of these actions. People wanted Yanykovych to resign along with his government. While in the first week the idea of Euromaidan was about EU integration, after that bloody night people were more determined to protect their rights and pull down the government.

Position of the Government

Since the 21st of November on, the president Viktor Yanukovych has been silent. He made no comments. In Vilnius he even refused to talk to journalists. The first interview he gave was a TV-interview on the 27th. There, though, he didn’t say anything particular. ‘The only thing I can do to the protesters is to give my applause to them. They have their right for peaceful protests,’ said he.

After the police clean-up of the Euromaidan on the 30th, the Prime Minister Mykola Azarov claimed that he had no idea the attacks on the demonstrators had been planned. He said it was neither him nor the president who gave an order. Azarov promised to punish those in charge but people didn’t believe him. Furthermore, the protesters were claimed to prevent community services from placing the New Year’s tree on the square. Later on, angry Ukrainians decorated a tree with posters, slogans and a Ukrainian flag on top.

Protests on the Bankova Street on 1st of December, 2013

There are many variants of the events near President’s Administration on Bankova Street. Many media feature this occupation in a different way. Many sources say those were the protesters who started the occupation and aggressive attacks against the Berkut. But the truth is that the assaults were started by the provocators. It was only later that some protesters were instigated to join. Many people were injured or arrested. A real war seemed to break out. However, the situation was only on Bankova street. At the same time, 1 mln people were peacefully protesting at the Euromaidan. The protest should have been peaceful. No one wanted any violent attacks.

After this situation many people were taken to prison, even those not guilty. They had no access to the phone. They couldn’t get in touch with their family. Nobody knew what would happen to them. The government said it would punish up to 11 major protesters in charge of the assaults. The police started arresting people in large numbers. They took anyone who was somehow involved into Euromaidan activities. Those were the alleged leaders of the events. They started checking the students’ attendance at universities. They threatened with the expulsion those who were on Maidan. The police also checked all the publishing houses in Lviv that might have printed any anti-government matter. 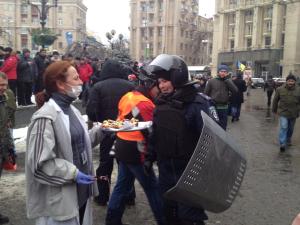 Ukrainian people are said to be very generous and kind. This can be also seen from the atmosphere on Euromaidan. People take care of each other and are ready to help. The motto of Euromaidan is “No violence”. People bring warm clothes and food, help with transportation and other facilities, host those who are outside Kyiv. The girls from the Euromaidan’s kitchen offer meals to the riot police officers on duty. Protesters also encourage them to be on the people’s side, to leave their shields and start fighting for a better future together.

Many say that Ukraine consists of two different parts:  east Ukraine is pro-Russian while the west is Europe-oriented.  But it is only partially true. There are many people from eastern Ukraine who support Eurointegration but the political situation there is worse than in western areas. All of this is because the power is in the hands of the Party of Regions (Viktor Yanukovych’s party). They threaten people, pressurize and apply different sanctions to kill their spirit. The problem is that the views of people on the east are much more different than on the west. Kharkiv, Odessa, Zaporizhzhia, Cherkasy and other eastern cities made their Euromaidans as well.

Euromaidan and the world

The whole world supports Ukraine. People from different parts of the globe came out to their central squares to join Ukrainians in their protests. Poland, USA, Canada, France, Belarus, Germany, Russia, Italy, Great Britain and many other countries expressed their respect to Ukraine.